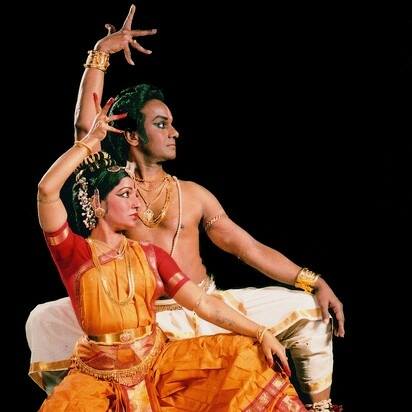 Raja and Radha Reddy are an extraordinary dancing couple in the field of the ancient Kuchipudi dance form. They are also considered as one of the most influential gurus and choreographers. The names of this couple go hand in hand with Kuchipudi dance which is regarded as solely responsible for making a mark on the cultural map of the world.

Preserving the traditional poetry and traditional dramatic sensibility, the couple gave a new magnitude to the classical art form – Kuchipudi. They have acquired the honour for Kuchipudi as the most highly rated dance form by their unique excellencies and eminence in the art. This extravagant couple emerged from Andhra Pradesh which is considered the birthplace of Kuchipudi .

Drs Raja and Radha Reddy display the masculine vigour and lyrical charm through the roles of mythological Hindu pairs like Shiva-Parvati, Rama- Sita, and Krishna- Radha through their intimacy and impeccable unanimity. They bring about the portrayal of Indian male-female principle in Indian philosophy through the Purusha and prakriti concept. The dancing duo is noteworthy for recreating the magnificent sculptures in the ancient temples of India through their perfect postures and refined patterns.

The Kuchipudi dancing pair got official recognition by winning the Padma Shree award in 1984 and the prestigious Sangeet Nataka Academy Award on 18th February 1992. They have individually bagged the Padma Bhushan Award in January 2000. Raja Radha Reddy were adorned with Nritya Choodamani by the Krishna-Gáan Sabha of Madras in December 1993. They undertook the privilege of being invited to participate in the International Dance Festival of Avignon in France and Salzburg in Austria. Their bestowment in the Festivals of India in the USA and the UK were regarded meritorious.

A short while ago, the dancing duo was solicited to inaugurate ‘Play House’ theatre in Durban, South Africa with their Kuchipudi performance. In the – All-Star Ballet Gala festival in Japan(July 1996) Raja and Radha Reddy were the preeminent charms. In November 1996, they inaugurated the India Festival in Bangladesh with their performance.

As they were trained by Guru Vedantam Prahlada Sarma and P.V.G. Krishna Sarma, in the authentic technique of Guru-Shishya Parampara, Raja and Radha Reddy are engaged in passing on their art to young and promising pupils at their institution NATYA TARANGINI in New Delhi.

Along with his second wife Kaushalya, the three Gurus teach Kuchipudi to several pupils around the world with headquarters in New Delhi at their performing arts center ‘Natya Tarangini’. In their matchless efforts to restore India’s rich cultural heritage, Natya Tarangini organizes many events, the most awaited was the National Festival of Dance and Music titled ‘Parampara Series’, started by the Reddy’s 17 years ago. They struggle each day to preserve and rarefy the cultural mosaic of our daily life and their efforts have been encouraged universally.

Claim request is processed after verification..