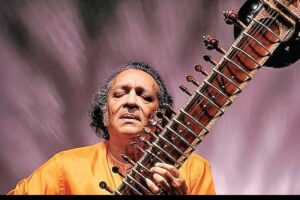 He is an eminent musician, Hindustani Classical music composer, and a virtuoso Sitar player. He is none other than Pandit Ravi Shankar. He was born to a Bengali Brahmin couple on 7 April 1920. He toured India and Europe as a dancer and his brother Uday Shakar accompanied him.

He learned to play Sitar under the court musician Allauddin Khan in the year 1938. He stopped his pursuit in dance and began learning Sitar. He started his music composition for Satyajit Ray’s trilogy ‘Apu Trilogy’. He also contributed his work as music director for All India Radio in New Delhi from the year 1949 to 1956

When he started his tour in Europe and America in 1956, he made Indian classical music popular. Yehudi Menuhin who was a violinist and Beatles guitarist George Harrison were closely associated with Ravi Shankar which also helped in popularising the Indian classical instrument.

During his tour in the 1970s -1980, he got busy promoting Indian classical music in the western world through his vast written compositions for Sitar and the Orchestra. Till his last days, he continued his performance.

He received many laurels, academic honors, and titles from various governments. He was awarded Padma Bhushan (1967) and Padma Vibhushan (1981) and Bharat Rathna (1999|).