Lavani – The dance of beauty 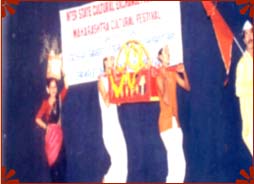 The Lavani means beauty which is the combination of dance, music and deals with varied topics like society, religion, politics, romance, etc. the women wear nine-yard sarees and dance to the rhythm of dholak which attracts the audience. The women dance sensually along with the catchy tune and teasing lyrics.

Lavana dance was the only source of entertainment to the tired soldiers of Maharashtra which was once a battle-torn state.  this was popular since the 18th and 19th centuries. During the Peshwai dynasty in Pune, when the dance was supported by the ruling elite, the dance reached the peaks of popularity. Honaji Bala, Ramjoshi, and Prabhakar were the Marathi poets who gave the dance a new look and took it to a great stage. Nowadays, Lavani lost its rich background image and became confined to sensual entertainment presented in a cheap form in Marathi films.