The Loor is a dance form famous in the region of Bangar in Haryana. It is performed by the female dancers during the Holi festival.  In this performance, the girls stand in a semicircular fashion and face each other. The first group sings the song and the other group replies to it.  The first group sings to the other saying that, ‘as your bahu or daughter in law has given birth to a baby girl and a son is born at our side, why don’t we unite them in marriage?’

In the song, eventually the girls start dancing too. The song is about discussing the marriage proposal between the two alliances. After the proposal is accepted, they start deciding the presents which are to be given to the daughter in law through the lyrics of the song. 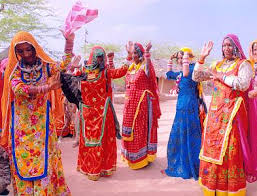 The marriage is then performed in the song and then there is a sad ‘Bidai’. That means the girl is sent to the in laws place.  Here the song becomes very emotional.  Once the bride reaches, the next event shown is that the husband is in the army and he is away for twelve years. The girl sadly sings and asks a pigeon to convey a message to her husband.  The pigeon reaches her husband and the husband comes back home.  There is an air of happiness and joy which is displayed in the song. And with this the tempo and rhythm increase and the dance also reaches its climax.