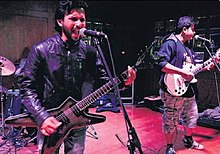 Compared to the filmi or fusion musicality scenes, the rock music in India is small. The origins of Rock music in India was in the 1960s when international stars such as The Beatles visited India and brought their music with them. The collaboration of the artists with Indian musicians such as Ravi Shankar and Zakir Hussain have led to the development of raga rock. the credit of bringing Western pop, folk, and rock music to the masses goes to the International shortwave radio stations such as The Voice of America, BBC, and Radio Ceylon. In the late 1980s, Indian rock bands began to gain prominence only much later.