Ghatam is an instrument in India that is unlike tabla and mridangam as it doesn’t have a covering of a membrane over its mouth. It produces various metallic sounds and comes in different sizes which give rise to give different pitches. The Ghatam should be held by the player with the mouth pressed against the player’s stomach as per the Carnatic music. The player can change the pitch and resonance by changing the amount of pressure he puts on the pot by placing it closer to his stomach. The surface of the ghatam is tapped by the fingers of the player. Ghatam is very popular in classical music even in Kashmir it is held in high regard.
The mouth of the Gotham is narrow it has an outer rim. There is a different tone produced when we strike the body or neck of the instrument. It is renowned for its metallic sound and different pitch and along with mridangam mostly is used in concert performances.
The bottom is a regular clay pot in appearance but it can be made up of a mixture of clay mud and metals like brass or copper. The ghatam is thick and produces a quality tone.
Ghatam is useful in introducing Carnatic rhythms which are fast.
Ghatam comes from the word ghata which is the Sanskrit word first described by Sage Valmiki in Ramayana it is described in several Sanskrit texts around the same period of time.
Ghatam was used in several Indian states as a folk instrument till today particularly in Punjab. Since the 19th century in the Carnatic classical music performances, Ghatam was used. The contemporary ghatam players use the Tabla techniques to play the Ghatam. Palani Krishna Iyer first introduced the playing techniques and rhythm patterns for the Ghatam. The players of ghatam sometimes wear metal rings to produce sharp sounds
In the North, the Ghatam is played in an upright position. In Carnatic music, the player holds the path against his stomach to produce the resonance and pitch of the sound. 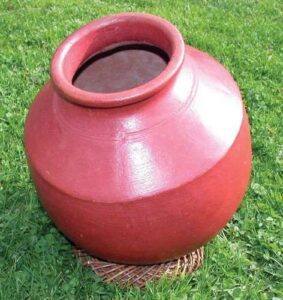