The Mithila and Koshi region of North Bihar is famous for its folk dance which is named as Jat Jatin. It is performed in the moonlight by the couples and their epic love stories are depicted.The story is about Jat and Jatin who were lovers and were separated due to contrary situations in life this dance usually is performed during monsoons.

Other conditions of life such as poverty or sorrow and love affection and some trivial humorous fights between husband and wife or lovers are all expressed through this dance.

The dancers sometimes wear masks to express the feelings of the dance in some of the versions of this folk dance. 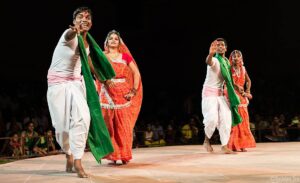