The Jatra is a dance that originated in West Bengal and also in Orissa.  It is popular in the States of Bihar as well as it has a vivid music form and the theatre draws in the stories from several sources including the Hindu mythology, the popular legends and the realistic events. It is also known as procession.

The worth of Jatra took place somewhere in the 15th century when the bhakti-related processions were very common. Jatra was popular in the 18th century. The political messages were conveyed through the Jatra in the 19th and 20th centuries which was also known as the colonial period. The Jatra needs a platform which is square shaped. The platform leads to the audience and through the backstairs it leads to the dressing room. The gang way is one of the ways to leading to the dressing room as well as the audience. Sometimes the performers use the gangway even for acting. A chair placed on the stage can be used as a chariot or sometimes as a mountain or a throne hence it is used for many purposes.  Usually the stage is left empty and the stage assistants bring the props and carry away when it is not required. The writers of the jatra have become popular by writing the stories which are usually related to the Hindu mythology and the stories about Rama, Kali or Shiva. Historical love stories and emotional stories were also enacted on the Jatra stage. The script has dialogues and also included songs sometimes.

Singing the songs in the Jatra is a little bit complicated because it combines semi-classical melody along with the tunes of the classical ragas that are often related to the characters which have a minor role in the play. In the recent times, the Jatra play continues for 4 hours. They consist of songs as well as dialogues therefore; we can say it is a lyrical drama.

The singer in the Jatra may start the song but may again join the chorus later on. The main instruments which are used in Jatra are flutes, two kinds of drums, a Violin and Cymbals. Men usually play the roles of women.  Jatras are influenced by movies and are realistic in nature. Jatra dance has undergone many changes since its emergence.

The actors come from different religious backgrounds and performances. Mainly the men dress up as women but nowadays mix of two roles is also presented. The popular Jatra actors are very rich.

The Jatra is performed at nights and the stories that they depend on are taken from Hindu mythology. The raw emotions and feelings are displayed by the actors through the Jatra.   It is usually performed at nights it’s so entertaining that the jatra stays in the memories of the Bengalis. The Sanskrit word Jatra or Yatra means a procession this refers to an ancient form of Bengali theatre. 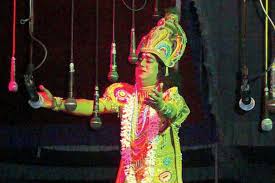 The Jatra gained popularity from Tripura, Orissa, Assam, Bihar, West Bengal as well as Bangladesh and when there were no theatres in Bengal there were many processions held in which the devotees sang and danced. Usually the Jatra goes on for 4 hours.

The Krishna jatra with so many devotees dates back to the rise of nationalism and the bhakti movement when this jatra came into existence.

The stories which are enacted are taken from Mahabharata and Ramayana. Even the Shiva jatara is included as a play.  The actors join troupe of Jatra at a very young age and work on promotion of the roles looking forward to stepping up the hierarchy of the roles. The performers are judged on their vocal prowess. The performers with thundering dialogue delivery capture a large audience with their fantabulous abilities.