Ottamthullal is said to be another version of Kathakali and known to be ‘Poor mans’ Kathakali’. A Person named Kunchan Nambiar had created this art form as a medium to protest against the socio-political structure and societal prejudice. They are performed in the Kerala temples. 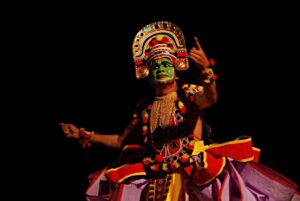 This dance form hails in all its glory till this moment. An Ottamthullal artist wears a colorful costume like a Kathakali dancer as well as sings or recites the dance song called Thullal along with acting and dancing. Ottam thullal is extremely satirical as it is made to oppose the prejudice of society. The enactors humorously enact the satire with freedom at his discretion. That is one of the reasons for its popularity.

Some truly marvellous work on behalf of the owner of this web site , utterly outstanding articles . Malanie Kellen Chadabe

Saved as a favorite, I love your site!