The indigenous dance form named Popir is one among the most popular dance forms. It is performed by Galos of Arunachal Pradesh. This is a dance form mainly performed by girls who are young with bright dresses with along with headgears and is greatly similar to the ponung dance. The girls wear their traditional costumes along with beaded ornaments which are multi-coloured.

This dance is mainly done to drive away evil powers which cause bad luck in the month of April. This is an important festival of the galo tribe of Arunachal Pradesh which spreads universal happiness and is done to bring good luck along with wealth and good health. 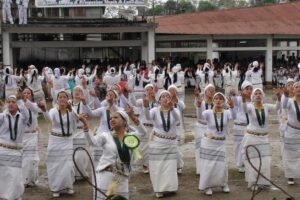 The animals are sacrificed and rice powder is smeared on each other’s faces as a ritual which is a remarkable feature of the festival of Mopin. For the animal sacrifice ritual the animal Mithun is chosen as it is considered auspicious.