The Yadavas (a caste considered as descendants of Krishna) perform the Raut Nacha.  At the time of ‘devudhni ekadashi’, this dance is performed to worship Lord Krishna. This dance which has a close resemblance to the Raas Lela, is considered to be performed at a time which is known to be the awakening time of Gods after a resting period of Gods according to the Panchang which is a Hindu calendar.

The land of a great culture- is the very own state of India – Chhattisgarh. The diversity shown by the various tribes which inhabit the subcontinent is pretty impressive. The tribes live in places like Korba, Manipur, Bilaspur etc. The tribal dances are practised among the tribes to commemorate few rituals by the Gond, Dhurva, Kawar, Halba etc. These dances link the tribal population together.

The victory of the Yadava clan along with Lord Krishna over the evil Kansa is celebrated through this dance. At first the dance was only performed by the Yadava or the Raut clan. As the time went by the dance was practised by all the communities. 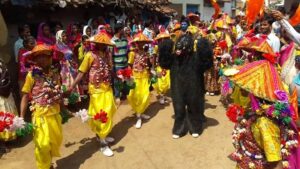 The costume is very attractive with the colours and the bells which are attached to the costume. The theme of ‘Good over evil’ is displayed by the usage of the metal shield as well as stick in the dance. Kabir and Tulsidas’ dohe are recited and it adds a good essence to the music and dance. The recital or singing of the doha during occasions has become an essential component in the Chattisgarh culture

Both the male and females dance by using the metal shields and sticks celebrating the victory over evil. This dance is not covered under the professional dances where you can be trained but it is passed on as a culture from generation to generation.