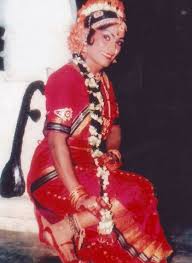 Sri Vedantam Radheshyam obtained Diploma (Honours) in Kuchipudi dance. He was in this field of teaching as well as on-stage performance for more than three decades. Formerly, he worked as Incharge Principal at Sri Siddhendra Kalakshetra Pranganam, Telugu University.

He navigated to many places in India and abroad and enchanted the audience with his performance in over 2000 dance programs.  His claim to fame includes not only his innate expertise of singing, dancing but also his ingenuousness and purity.

In other words, he is a dancer who presents with aesthetic effect always tries to keep a link with Nattuvangam. (NATTUVANGAM is a Tamil word i.e. Natta + Angam. Natta means dancer or Dance Performance and Angam means body or main operating or controlling center. The combination of these two is called Nattuvangam).

Here are some of the characters he had portrayed at various concerts: 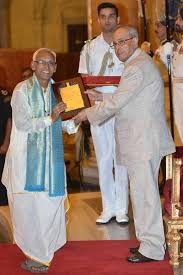 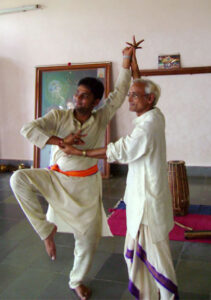 After retirement, he came back to his village and set up ‘Vedantam vari Gurukulam’ in his own home town Kuchupudi. In the Gurukulam the students are offered free food and accommodation along with dance classes. Most of his sishyas have migrated to different places of the world to promote ‘Kuchipudi- the classical dance form’. His humility is notable as he ventures on the streets on his old bicycle.

“Some people are remarkable, surprisingly simple; albeit difficult to find.” – one such person is Vedantam Radhesyam.

Check out Radheshyam’s eloquent speech and extravagant performance on the sizzling Kalapeet stage.