Sri Vedantam Raghavaiah was born on June 8, 1919, to Vedantam Ramayya and Annapurnamma in Kuchipudi, Andhra Pradesh. This eminent choreographer was even a notable movie producer, screenwriter, performer. He was a great Kuchipudi dancer also. His spouse, Smt. Suryaprabha was a superstar as well. His sister Puspavalli was also an acclaimed on-screen character.

He played the role of an actor in Mohini Rugmangada film, directed by K. S. Prakash Rao in 1937.

He was a skillful Kuchipudi artist. Apart from being a gifted dancer, he was a euphonious singer and also virtuoso in the highly favoured ‘tala’ system. His talents shone when he undertook formal training under Chinta Venkataramayya. He wholly devoted himself to imbibing the methodology of dance, music, tala, and stage-presentation from his guru Vempati Venkatanarayana, a prodigy known as ‘Laya Brahma.’ 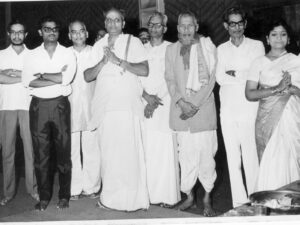 He secured a gold medal from the British Government for his debut performance as Prahalada. Thus began the sensational ‘Swarna-adhayanam,’ or ‘Golden Era for Kuchipudi’ where Kuchipudi was acknowledged as a great art form by the government at that time. He played innumerable alluring roles like Lohitasya, Kusa, Lava, and others and later became one of the magnificent ‘bhrukumsas’ (female impersonator) of his time by mastering the Kaisiki vritti. Sri Raghaviah was an exceedingly elegant skilled artist as he could sing while performing and also played ‘mukhya sancharas’, the key-notes of every ragam of any daruvu, and this made his performances scintillating. Raghavaiah made ‘Usha kanya’ quintessential. His unparalleled performances in the characters of Sita, Leelavathi, Chandramathi, Sasirekha, Mohini, and Satyabhama are still recollected by many. When he was being marked as an excellent bhrukumsa, he took it up as an ultimatum and created history by performing the key male roles like Harischandra, Hiranyakashyapa, Rama, and Krishna. 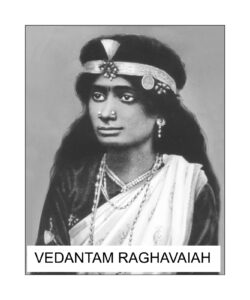 He not only performed dance numbers but also made a mark in Telugu films as a choreographer. Raitu Bidda, a movie directed by Gudavalli Ramabrahmam and Vipranarayana directed by P. S. Ramakrishna Rao brought him a great appreciation in the industry as a renowned choreographer. He also choreographed some of the Bollywood films. Vedantam’s first film as a director and producer was Strisahasam starring Anjali Devi and Akkineni Nageshwara Rao in 1951.

In 1953, the all-time famous Devdas was directed and produced by Sri Raghaviah in both Telugu and Tamil. The movie starred Akkineni Nageshwara Rao. He even produced Suvaarna Sundari in the late 1950s which was remade in Hindi and brought great fame in the Bollywood industry as it integrated many musical tracks sung by great legendary singers like Lata Mangeshkar, Manna Dey, Mohammed Rafi, Sudha Malhotra, and Asha Bhosle. Traversing for more than 12 years (1937 to 1949) as an on-screen character and choreographer, he carried a commitment to showcase Kuchipudi.

All of his movies were known for an atypical storyline, music, and characterization. He likewise learned the whole film restructuring, for example, Camera, Sound, altering, lighting, and so on. His profession and pursuit which spread over through four and half decades were astounding. Raghavaiah upgraded the wonderfulness of Kuchipudi dance; nevertheless, his sudden demise on November 18, 1971, at the age of 52, was a devastating loss to Kuchipudi and also to the cinema industry. 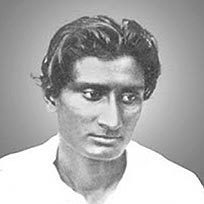