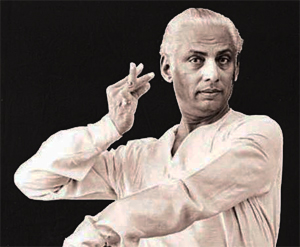 The Kuchipudi dance form was popularized by the legendary dancer named Vempati Chinna Satyam. He was born in a family of dancers in Kuchipudi a small village in AP on 26th October, 1929. He started being trained in Kuchipudi at an early age of nine through Sri Vedantam Lakshmi Narayana Sastry and refined graceful movements from Sri Tadepally Perraya Sastry.

He moved to the madras to master Kuchipudi and to make it popular all around the world. He established the Kuchipudi Art Academy in Madras on 6th February 1963. ALSO Kuchipudi Kalakshatra in 1985 in Vizag.

He soon shone brightly in the international fame. He bagged many awards and titles such as “Sangeet Peeth of Bombay”, “Asthana Natyacharya of Tirumala Tirupati Devasthanam”,”T.T.K. Memorial Award” by Music Academy, “Natya Kalasaagara of Waltair”, “Raja Lakshmi Award of Madras”, “Kalaprapoorna” from Andhra University, “Natya Kala Bhushana of Guntur”, “Bharatha Kalaprapoorna of Hyderabad”, D. Litt. from Sri Venkateswara University, “Asthana Natyacharya of Pittsburg”, and “National Award from Central Sangeet Naatak Akademi, New Delhi”. He was awarded by many State Governments of India such as Kalidas Puraskar by the Government of Madhya Pradesh and Kalaimamani by the Government of Tamil Nadu. He was honored with a Doctorate degree from Andhra University.