Violin, byname fiddle, bowed stringed musical instrument that evolved during the Renaissance from earlier bowed instruments: the medieval fiddle; its 16th-century Italian offshoot, the lira da braccio; and the rebec. The violin is probably the best known and most widely distributed musical instrument in the world. 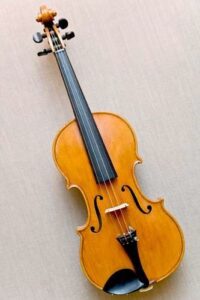 Like its predecessors but unlike its cousin the viol, the violin has a fretless fingerboard. Its strings are hitched to tuning pegs and to a tailpiece passing over a bridge held in place by the pressure of the strings. The bridge transmits the strings’ vibrations to the violin belly, or soundboard, which is made of pine and amplifies the sound.

Inside the instrument, beneath the treble foot of the bridge and wedged between the violin belly and back, which is made of maple, is the sound post, a thin stick of pine that transmits the string vibrations to the instrument’s back, contributing to the characteristic violin tone. The belly is supported from beneath by the bass bar, a narrow wood bar running lengthwise and tapering into the belly. It also contributes to the resonance of the instrument. The sidewalls, or ribs, are constructed of pine-lined maple.

The violin was early recognized for its singing tone, especially in Italy, its birthplace, where the earliest makers—Gasparo da Salò, Andrea Amati, and Giovanni Paolo Maggini—had settled its average proportions before the end of the 16th century. During its history the violin has been subject to modifications that have progressively adapted it to its evolving musical functions.

In general, the earlier violins are more deeply arched in the belly and back; the more modern, following the innovations of Antonio Stradivari, are shallower, yielding a more virile tone.

In the 19th century, with the advent of large auditoriums and the violin virtuoso, the violin underwent its last changes in design. The bridge was heightened, the sound post and bass bar were thickened, and the body became flatter. The neck was angled back, giving greater pressure of the strings on the bridge. The result was a stronger, more brilliant tone in place of the delicate, intimate tone of the violin of the 18th century.

The violin was assimilated into the art music of the Middle East and South India and, as the fiddle, is played in the folk music of many countries. The tenor violin, known from the 16th century through the 18th century, was midway in size between the viola and cello. It was tuned F–c–g–d′. “Tenor violin” also occasionally referred to the viola.

Young children often become fascinated with learning to play the violin, and if so, they should be encouraged. The physical, mental, and social benefits of playing a musical instrument are well-known, but the violin offers some rather surprising additions.

Many studies have been conducted on the benefits of playing the violin or some other musical instrument. A recent study by the McMaster University’s Institute for Music and the Mind found that musical training, even one year’s worth, positively impacts the memory and attention span.