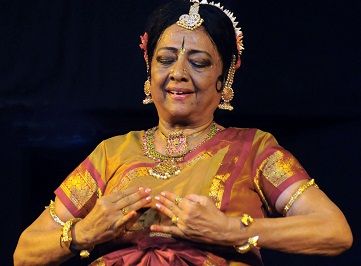 Yamini Krishnamurthy was born on December 20, 1940, in Madanapalle, Andhra Pradesh. She is a graceful Bharata Natyam dancer. She was a student at Rukmini Devi Arundale’s Kalakshetra, a leading school for the dance form and learned the basic skills and studied under the famous dancer, Kanchipuram Ellapa Pilai and Thanjavur Kittappa Pillai. Her first debut was in 1957 after which she became a rising star. She learned Kuchipudi and Odissi also from Pankaj Charan Das and Kelucharan Mohapatra. She got trained in Karnataka vocal music and also she learned to play vina. She was mostly interested in Bharata Natyam and Kuchipudi.

She opened her dance studio in the year 1990 named Yamini school of Dance in Delhi.

She was awarded the Padma Shri in 1968, the Sangeet Natak Akademi Award, and the Padma Bhushan also she was even honored with the title of Asthana Narthaki by Tirumala Thirupathi Devasthanam Temple. A passion for dance was published in an autobiography with the help of Renuka Kahddekar in 1995.

A multifaceted artist, Krishnamurthy received many awards for her work, including the Padma Shri (1968), the Sangeet Natak Akademi Award (1977), and the Padma Bhushan (2001). The title of Asthana Narthaki (“Resident Dancer”) was bestowed upon her by the Tirumala Tirupathi Devasthanam temple. She published an autobiography (with Renuka Khandekar), A Passion for Dance, in 1995.