The most popular drum set in North Indian music. Tabla is used in instrumental and vocal music as well as dance.  It’s the best percussion instrument throughout India as it is very versatile in all musical styles. Due to the tonal beauty and sophisticated nature, it has reached an unmatched status. Tabla maintains the metric cycle through which the compositions are set. The tabla is played by soloists and they are taught from generation to generation.

The tabla is a fusion of Arabic, Persian and Turkish influences. Tabla comes from tabl from Arabic which means an instrument facing upwards with a flat surface.

The instrument was hemispherical or egg-shaped previously and skin was stretched over the opening. They were used for accompanying military expeditions of Muslims. They are also called kettle drums later they became rounded like eggs. They were made of metal. For all the percussion instruments over the middle easy the term tabl became the generic term, for example, tabl-baladi, the tabl-turki, tabl-naqqara, tabl-migri, tabl-al-gawig, etc. 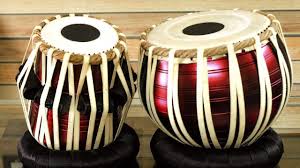