Dating back to the first millennium B.C, the Veena is one of the oldest instruments. The sculptures from the 2nd century B.C  depict veena played. The Carnatic music highlights the Saraswati veena and the Rudra veena is played the most in Hindustani music. Seven strings are strung over the frets which are 24 in number. The resonator or kudam has a tapering dandi or neck which has a tuning box curving downwards named yali.

Keeping the resonator to the player’s right, it’s played by sitting cross-legged. The veena can play all types of oscillations in Carnatic music called gamakas. The Hindu Goddess Saraswati plays veena sitting on a lotus. 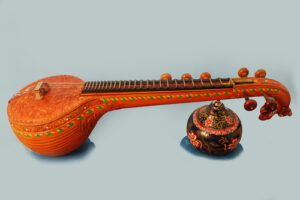 Vena is similar to the string instrument Grecian harp. The instrument can be attributed to Raghunath Nayak of Tanjavur in Tamil Nadu.  There were several modifications made in a veena.

Jackwood is used to make the veena’s body. Veena has a round and large body with a wide and thickened neck carved at the end into the head of a dragon. Underside the neck, a resonator is attached. 24 metal frets are fixed with the help of hardened beeswax mixed with charcoal powder.

Four metal strings resting above the frets produce the melody. they are stretched over a bridge on the body of the veena. 3 strings along the neck of the instrument. These strings maintain time and useful to play the drone. The player rests the resonator on the left lap. The left hand is used to press pull and glide on the frets and the right-hand fingers are used for plucking and twanging the strings. Sruti laya and Sahitya are completely provided by the veena. Veena gives the mellow tonal quality and creates a meditative atmosphere.