Yakshagana refers to old Sanskrit literature. It is very popular form of theatre combining energetic dancing acrobatics and singing. This is performed in the state of Karnataka. The battle scenes are portrayed and also the performance is heroic and emotional at the same time. Therefore Yakshagana is considered as a folk theatre. The word Yakshagana means the music derived from heavenly Yakshas.

The Yakshagana was used in ancient schools to make children memorize the mythological stories. The earliest Yakshagana play dates back to 1564 when it was taken from a palm leaf manuscript.

In the common folk language, the Yakshagana relates to the heroic sequences found in the Mahabharata and Ramayana along with Sanskrit quotations. There are three types of Yakshagana. The first form is called as chamber form performed during the dry season. Mostly in the coastal Karnataka this danceis performed without any makeup or grand or specific attire. Another form of Yakshagana is known as Doddata. This is performed in the Northern parts of the Karnataka. The satires and and love stories are mainly focused on the themes of Yakshagana. The troupe consists of 20 members comprising of actors, singers, dancers, musicians and stage assistants. The actors are named after a village or a temple. Yakshagana leader is called Bhagvata. He leads the performance along with classical music and ragas as well as melodies of the folk.

The male participants also play the role of females and they also played several roles in the play. The Bhagvata takes care of the narration and leads the orchestra and also sings in the play.Hence his role is the most crucial one. The buffoon is also very important as he performs among the other mythological characters in the play.

The costume includes the headgear which is turban like. The main role performers wear huge black turbans glittering with golden ribbons. They wear red, green or black coloured jackets. Ornaments like necklaces, ear decorations etc are worn by the performers.

The main characters wear artificial moustaches made of threads and also the male characters dress up with conch shell design on both cheeks and a u shaped mark on the forehead. 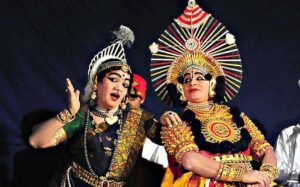 The main variations of the Yakshagana are:  one is the eastern form which is popular in North Karnataka its name is Moodalapaya. And padavala paya which is known as coastal Yakshagana but the most dominant is the Tenkuthittu or the southern style of Yakshagana.

The dance movements, the expressions and extempore dialogues along with beautiful music and attractive costumes made Yakshagana the most popular folk theatre forms of Karnataka.

In olden days coconut fronds with jute strings dipped in kerosene were used as a source of light but now electric bulbs have replaced them.

In the beginning of the performance the Bhagvata along with the musicians comes up on the stage and sits on elevated structure in front of the back curtain and worships Ganapati and at the time no actor is present on the stage.